Fast heart rhythms (arrhythmias) that involve the upper chambers of the heart are often referred to as SVTs (supraventricular tachycardias) and can often be treated with an SVT ablation. These arrhythmias cause the heart to suddenly beat very quickly due to an electrical ‘short circuit’ and can cause symptoms such as dizziness or fainting, shortness of breath, palpitations or sometimes chest pain/discomfort.

The first two examples can be treated with an ablation procedure to cauterise an extra or accessory pathway with ≥95% success for a single procedure (1, 2). In the case of atrial tachycardia success rates range between 60-95% depending on the type of circuit and whether or not the arrhythmia can be induced (brought on) at the time of the study. Sometimes medications similar to adrenaline can be used to help bring on these arrhythmias.

Wolf-Parkinson-White Syndrome or WPW Syndrome is a condition where a person has an accessory pathway (an extra electrical pathway connecting the atria [hearts upper chambers] to the ventricles [hearts lower chambers]) that can often be seen on a normal resting ECG (electrocardiogram) and symptoms from SVT as a result of this. Patients with WPW Syndrome most often have SVT as described above, where an electrical short circuit travels down the hearts normal electrical system (the AV node) and up the accessory pathway (AVRT, or the circuit shown in green in the diagram below).

If a person has has an accessory pathway (also known as pre excitation or a delta wave) on their ECG but no symptoms as a result, then this is referred to as a WPW ECG. Because accessory pathways can conduct very rapid heart rates from the atria to the ventricles, people whose ECGs show an accessory pathway can be at an increased risk of cardiac arrest and sudden death. Whether or not there is an increased risk of cardiac arrest can be assessed by an electrophysiology study (and often treated at the same time), or sometimes assessed by an exercise stress test.

An SVT ablation itself will generally take between 1-2 hours (sometimes longer for more challenging cases). Most procedure are performed under ‘twilight sedation’ with local anaesthesia used for placing the sheaths (small tubes) into the femoral vein (vein at the top of the leg). An SVT ablation can be performed under general anaesthesia if there is a particular reason but often if too much sedation is given it can be harder to induce the arrhythmia and find the ‘short circuit’.

Usually three or four electrical catheters (2mm diameter) are passed up the veins to the heart using X-ray guidance (in some situations such as pregnant patients, procedures can be performed without any use of X-ray). Catheters are usually positioned within the right ventricle, in the coronary sinus (a vein which runs behind the heart), beside the normal conduction system of the heart (the AV node or His bundle) and possibly in the right atrium. These catheters can sense and record the electrical activation of the heart and can also pace the heart from different positions to speed it up. By pacing the heart more rapidly we can bring on the SVT or short circuit and then zero in on the critical areas for treatment (cauterisation or ablation). Often only one or two carefully positioned ablations are required to successfully treat SVT.

Sometimes ablation can be felt as some discomfort or heating within the heart but if this is the case more sedation or pain relief can be given. In general there is a 1:1000 chance of a potentially serious complication with SVT ablation such as a heart attack or stroke. The risk of bleeding around the heart requiring drainage (a needle passed below the rib cage to drain blood) is 1:500 and in the case of AVNRT where the short circuit is near the hearts normal conduction system the risk of requiring a permanent pacemaker is 1:400 (3).

For more reading about SVT you can visit www.hrsonline.org/Patient-Resources or read the articles below.

The picture above shows a normal heart with four chambers (right and left atria at the top and right and left ventricles at the bottom). The hearts normal electrical system is shown in yellow. Three different ‘short circuits’ that can cause SVT (supraventricular tachycardia) are shown. The short circuit in AVNRT is shown in blue. Here electrical activity travels down a ‘slow pathway’ in the AV node (zigzag line) and then back up the normal AV nodal pathway and so on. The electrical circuit that occurs in AVRT is shown in green. Here electrical activity travels down the hearts normal conduction system but can return to the top chambers of the heart via an extra or accessory pathway (two black lines) and so forth in a continuous fashion. Atrial tachycardia or AT is shown in purple. This most commonly results from a ‘hot focus’ or a few cells in the heart that fire off electrical impulses at an abnormally fast rate and these are then conducted down the hearts normal electrical system. 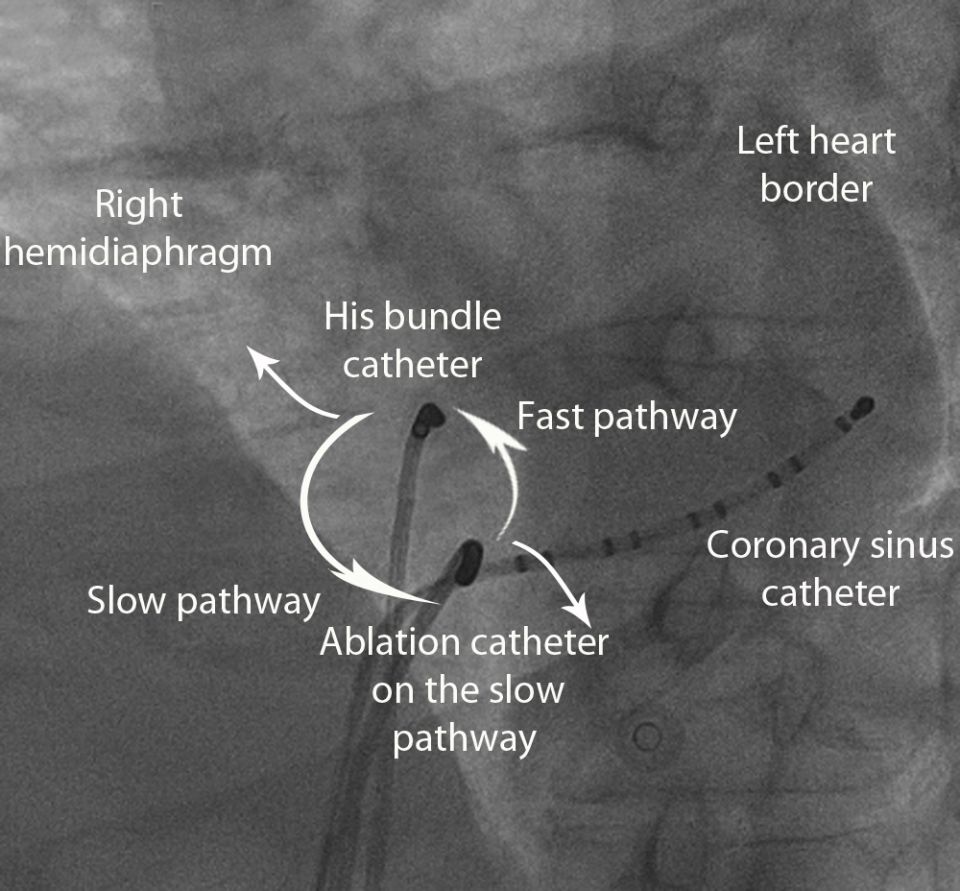 The picture above shows an X-ray of the heart with three electrical catheters positioned as labelled. This patient had the most common form of SVT (AVNRT) where electricity would travel in a short circuit in the centre of heart using part of the normal conduction system there (AV node). This is the same as the blue circuit shown in the first picture). A single ablation at the site of this 'slow' pathway (the position of the ablation catheter) stopped the SVT and conduction simply continues down the 'fast' pathway as usual. 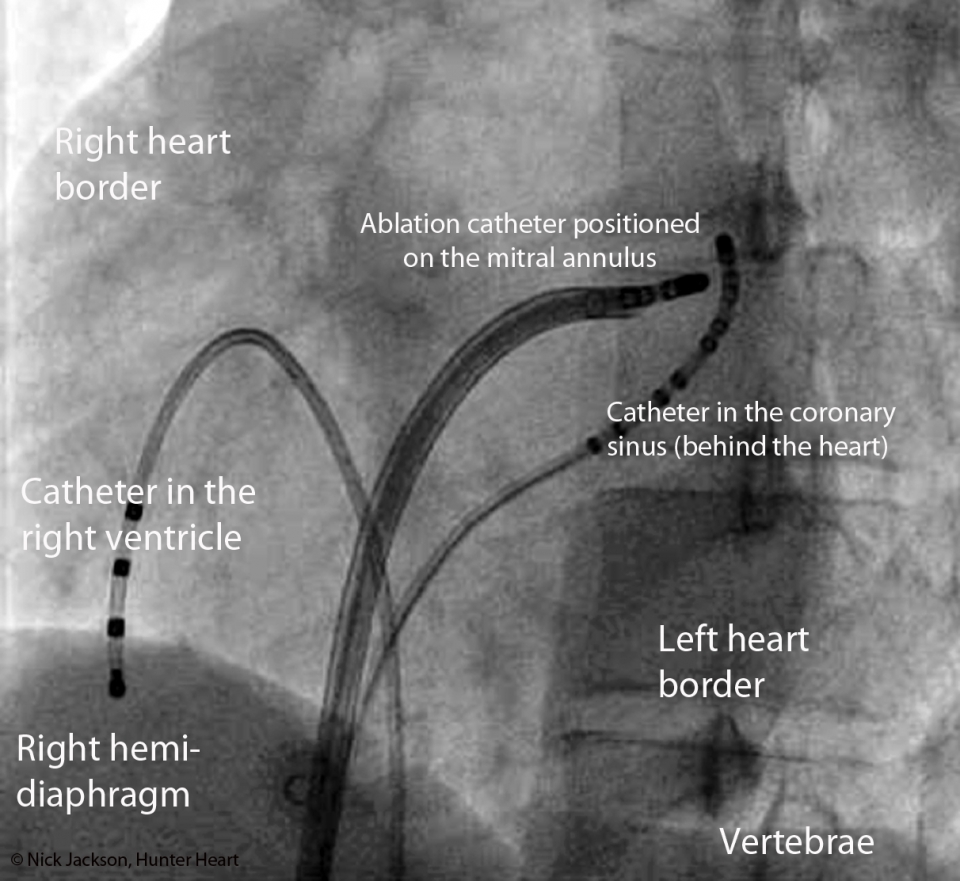 The picture above shows an X-ray of the heart with three electrical catheters positioned as labelled. This patient had SVT (AVRT) where electricity would travel in a short circuit down the hearts normal conduction system and back up an accessory pathway on the left side of the heart (similar to the green circuit shown in the first picture). A single ablation at the site of this abnormal pathway (the position of the ablation catheter) stopped the SVT and abolished the accessory pathway.