Permanent pacemakers (PPMs) are used to treat patients with symptoms due to slow heart rates. A person’s heart rate may be slow due to a problem with the hearts normal pacemaker (the sinus node) and this is referred to as sick sinus syndrome (SSS). A patient may also have heart block, when only some (or none) of the impulses from the top chambers of the heart (the atria) conduct down to the bottom chambers (the ventricles) of the heart. The most common reason for the normal electrical system of the heart to malfunction is progressive fibrosis or scarring that becomes more common with age. Other causes for slow heart rates include a previous heart attack, medications, transient causes such as excessive vagal nerve tone and less common causes such as myocarditis (inflammation of the heart muscle) or cardiomyopathies (weakness of the heart muscle). A PPM will not treat fast heart rates but it may be used in combination with medications or an ablation procedure for this reason. It will also record any rapid heart rates and provide other important information to help your doctor treat you.

Most commonly pacemakers are implanted with two leads (one in the right atrium and one in the right ventricle) as shown in the picture below. Sometimes only a single lead is required in the right ventricle (usually if a patient is permanently in atrial fibrillation) and if indicated, a third lead can be implanted on the outside of the left ventricle (see Implantable Defibrillators and Cardiac Resynchronisation Therapy). Current PPMs now have ‘home monitoring’ capabilities so that patients are given a monitor (like a modem) that can transmit alerts to their cardiologist over a mobile network if there are any issues with their PPM or heart rate. This provides an extra level of regular monitoring that doesn’t require coming into the office for checks.

Generally implanting a permanent pacemaker takes between 30 and 60 minutes and can be implanted either with local anaesthesia and sedation or with general anaesthesia. A pacemaker is a similar size to 2 fifty-cent pieces and is implanted under the skin and fatty tissue below the collar bone (usually on the left hand side if you are right handed). Leads are then passed down a vein and into the heart where they are anchored either with tines at the tip or a tiny screw that extends 1-2mm into the heart muscle. With a PPM implantation there is a 1:400 risk of bleeding around the heart requiring drainage, a 1:100 risk of injury to the lung (pneumothorax) that can require drainage and a 1-2% risk of bleeding or infection (1). Most patients will stay in hospital for one night and have a follow up appointment and check of their pacemaker in 1-2 weeks. Following that PPMs can usually be checked just once a year and they have an average battery life of around 10 years before a replacement is required.

For most people, having a PPM will not change your lifestyle in any significant way. It is still safe to use normal household appliances but mobile phones or tablets should not be placed directly over the PPM and very strong magnets or electrical fields such as radio towers and heavy-duty power equipment should be avoided. More information on permanent pacemakers and defibrillators is included in the section called ‘Before and After a Pacemaker or Defibrillator Implant’. For more reading please go to www.hrsonline.org/Patient-Resources 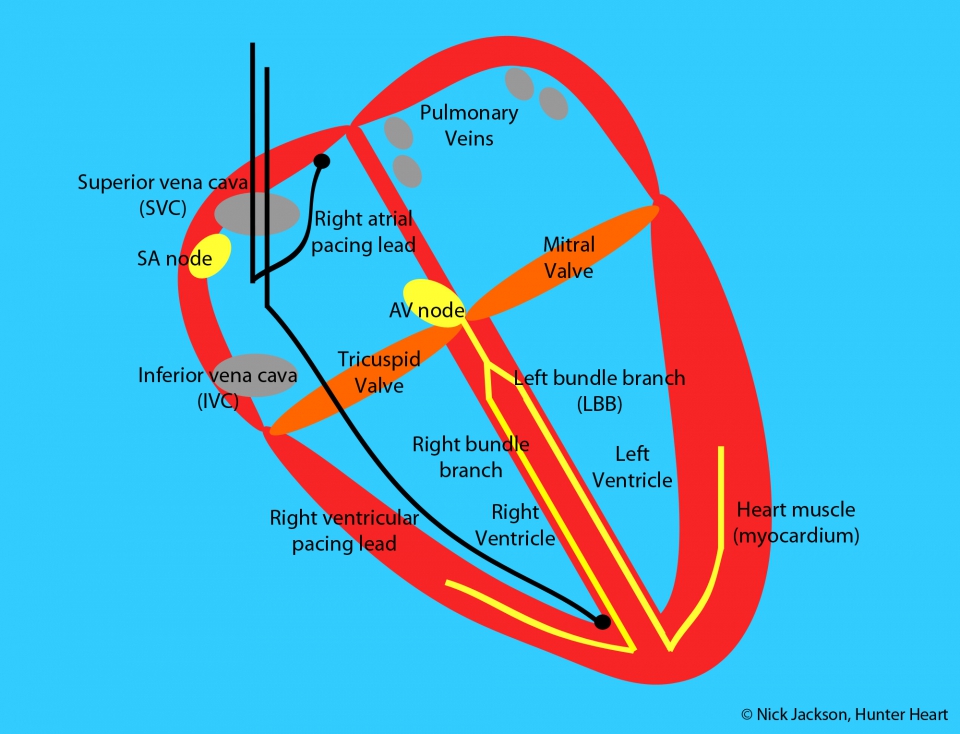 Above is a cartoon of a normal heart showing the four heart chambers outlined in red and the hearts normal conduction system in yellow. A normal heart beat starts at the SA node and spreads down to the AV node where the electrical impulse is spread out over the ventricles by 'wires' called the left bundle branch (LBB) and the right bundle branch (RBB). If there is a significant problem with the normal electrical system then a pacemaker can be implanted and here two pacemaker leads are shown entering the heart through the superior vena cava (SVC). The first lead is fixed into the muscle of the right atrium and the second lead is fixed into the muscle at the tip of the right ventricle. These leads will continuously monitor a patient’s heart rate and if it ever drops below the programmed limit (often 60 beats per minute) they will pace the heart to maintain a normal heart rate. 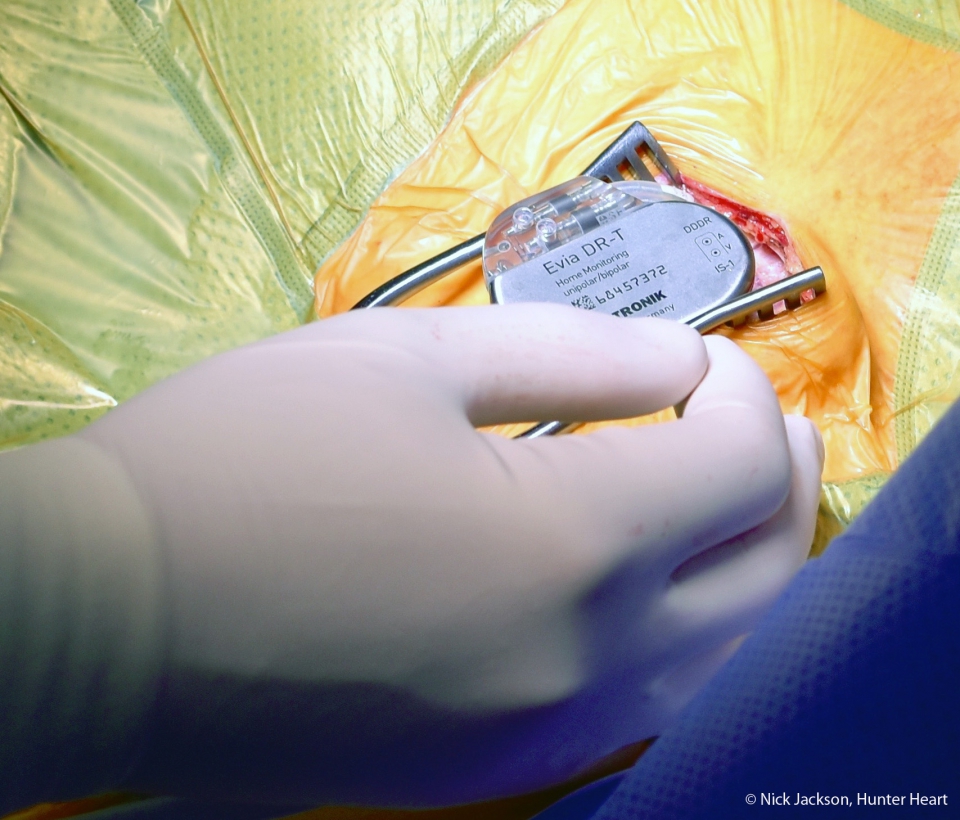 A dual chamber (two leads) permanent pacemaker is shown just prior to being inserted into a pocket above the pectoral muscle. Two leads that travel down to the heart can be seen connected to the device and it is inserted though a 3-4cm long incision in the skin just below the clavicle. 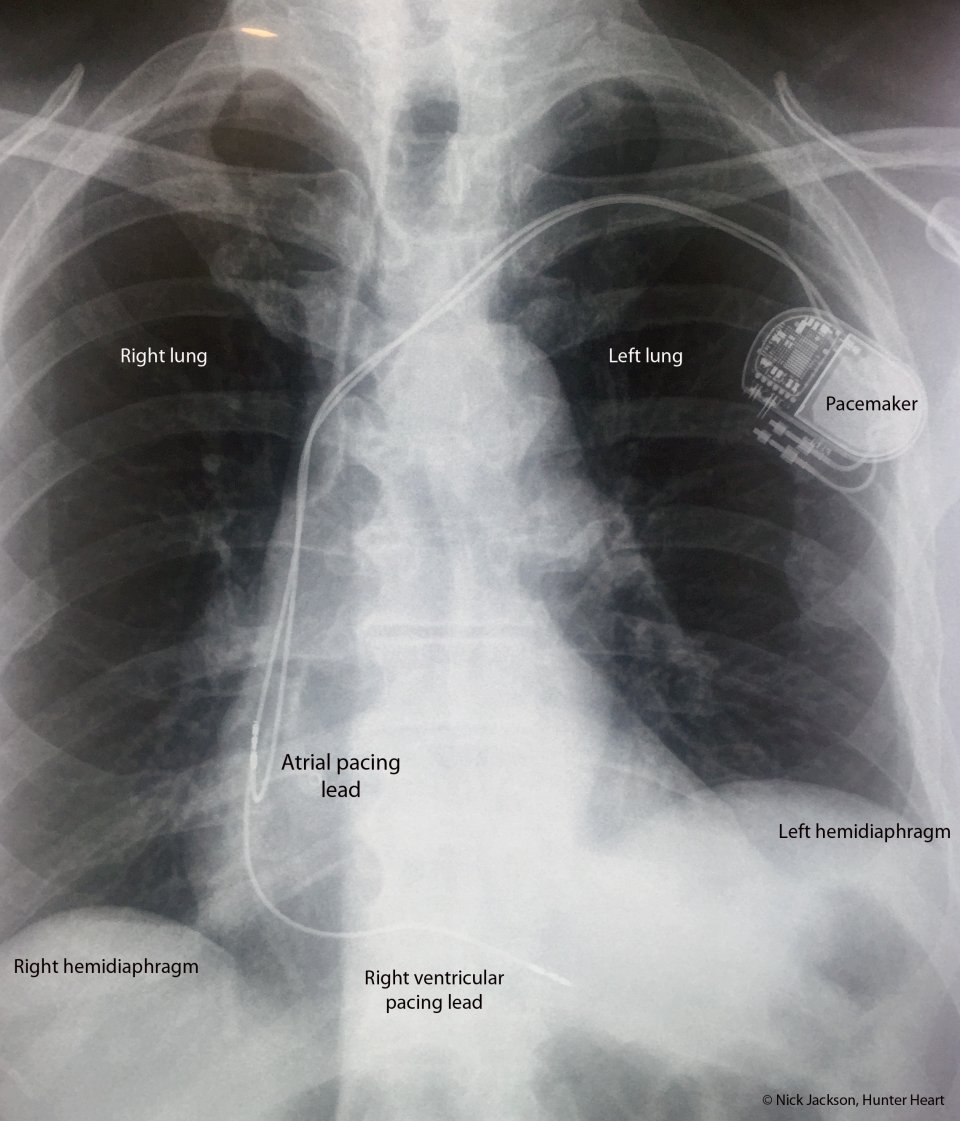