Atrial flutter is a short circuit where electrical activity travels in a continuous loop around the tricuspid valve/annulus on the right hand side of the heart. This causes the atria (the hearts upper chambers) to beat at around 300 beats per minute and commonly every second impulse travels down to the ventricles to cause a heart rate of 150 beats per minute (medications may be used to slow these heart rates down).

Atrial flutter may cause a persons heart rate to be increased (tachycardia) and can lead to symptoms such as palpitations (the sometimes unpleasant awareness of a persons heart beat), shortness of breath, dizziness, chest pain or sometimes lethargy. In atrial flutter the top chambers of the heart beat so quickly that they do not effectively pump blood and blood clots can develop. For this reason an anticoagulant or ‘blood thinner’ is often recommended to reduce the risk of blood clots and stroke.

An atrial flutter ablation will generally take around 1 hour and patients can either be given ‘twilight sedation’ to keep them comfortable or a general anaesthetic. A short ablation line is created between the tricuspid valve and the inferior vena cava on the right side of the heart to interrupt this circuit (shown in the second picture below). The risks with an atrial flutter ablation can include a 1:1000 risk of a potentially serious complication such as a heart attack or stroke, a 1:500 risk of bleeding around the heart requiring drainage (a needle passed below the rib cage to drain blood) and the risk of requiring a permanent pacemaker is 1:600. In general if complications do occur they will be identified at the time of the procedure and treated accordingly.

Following an ablation for atrial flutter it is important to continue to maintain good cardiovascular health to reduce the chances of developing other heart rhythms problems (such as atrial fibrillation or AF) in to the future. This includes keeping active (≥30 minutes of exercise a day), maintaining a healthy weight, a healthy blood pressure (≤130/80mmHg), not smoking, not drinking alcohol excessively (≤2 standard drinks on ≤5 days a week) and treating obstructive sleep apnoea (if applicable).

For more reading about atrial flutter you can visit www.hrsonline.org/Patient-Resources. 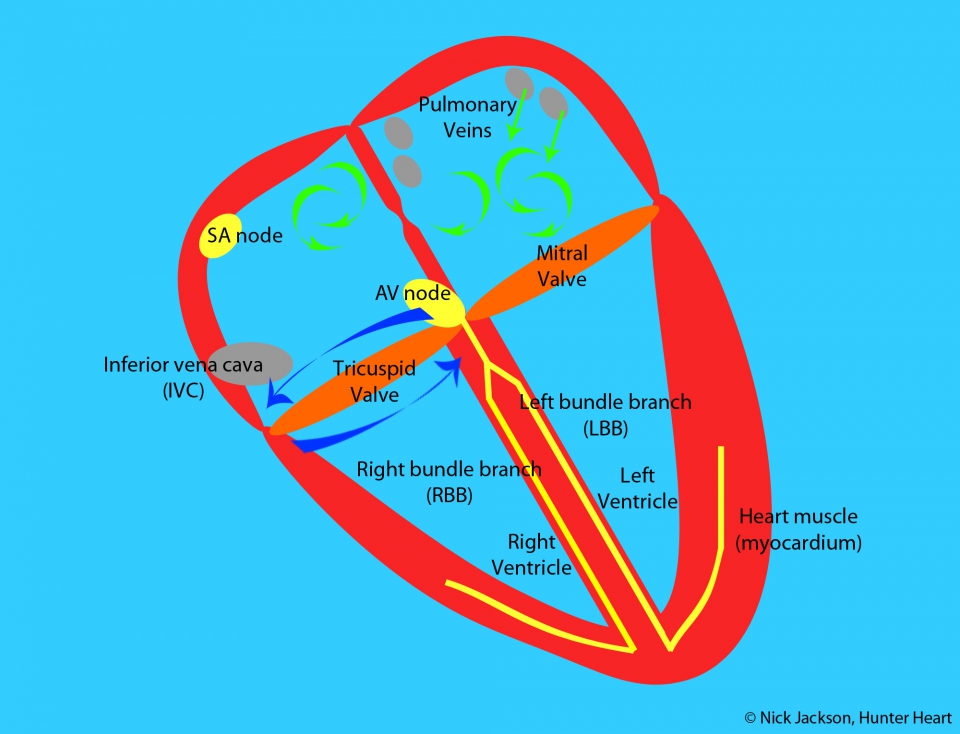 The diagram above shows a normal heart with four chambers (right and left atria at the top and right and left ventricles at the bottom). The hearts normal electrical system is shown in yellow. The short circuit that causes atrial flutter is shown in blue. Here electrical activity travels continuously around the tricuspid annulus/valve within the right atrium. Atrial flutter is treated by cauterising a line from the tricuspid valve back to the inferior vena cava (IVC) to interrupt the circuit. Electrical activity during atrial fibrillation (AF) is shown in green (see the section on AF).

The image above shows two X-ray views of the heart in a patient undergoing an atrial flutter ablation (LAO and RAO X-ray views). The image on the left shows the atria face on with a 20-pole electrophysiology catheter placed around the right atrium to identify the electrical activation. The white arrow shows the path of electrical activity in atrial flutter going anti-clockwise around the tricuspid valve (the valve between the atrium and the ventricle on the right side of the heart). On the right is a side on view of the same procedure. This image shows how ablation is performed along the cavo-triscupid isthmus between the valve and the inferior vena cava to interrupt the atrial flutter short circuit and stop it from coming back.

Above is an example of an electroanatomic map from a patient who has 'atypical atrial flutter'. Atypical flutter is used to describe short circuits that follow a different pathway to the short circuit described above as typical flutter. These can occur in the left or the right atrium and most commonly happen in patients who have previously had cardiac surgery or ablation procedures for atrial fibrillation. In this case the electrical circuit is traveling down the front wall of the left atrium, between the mitral valve and the left sided pulmonary veins, and then returns up the back wall of the left atrium to form a continuous circuit. Ablation along the top (roof) of the left atrium in this patient terminated this short circuit and we were no longer able to induce it (bring it on) following.