Before and After an Ablation

Before stopping any medications it is important to confirm with your doctor or Hunter Heart staff that it is safe to do so. If you are taking warfarin (anticoagulant) then in general this should be continued for the ablation procedure. If you are on a newer anticoagulant (rivaroxaban, apixaban or dabigatran) these are usually withheld for one dose prior to the procedure (stopped on the morning of the procedure for example).

If you are on an anti-platelet medication such as clopidogrel, prasugrel or ticagrelor then these medications may be withheld for 5 days prior to the procedure (if it is safe to do so) and if you are on aspirin then this is usually fine to continue.

Antiarrhythmic medications such as sotalol, flecainide, metoprolol, atenolol, verapamil, diltiazem and digoxin should generally be withheld for 3 days prior to the ablation to maximise the chance of inducing (finding) your arrhythmia at the time of the procedure.

Most other medications should be continued as usual and can be had with a sip of water up to two hours before hand. Since it is important to fast for six hours prior to the procedure, if you are on medications for diabetes you should clarify with your doctor if any changes to these are needed.

Depending on the ablation most patients will either stay in hospital for one night or go home later the same day. When the sheaths are removed from the groin no stitches are needed as the incisions are very small and usually can’t be seen at all after a couple of weeks (see picture).

If you notice any bruising, swelling or bleeding in the groin where the sheaths were removed the best thing to do is lie down and apply firm pressure over the site. A small degree of bruising or swelling can happen with coughing or straining after an ablation procedure but if it is painful or doesn’t settle down with a few minutes of firm pressure then you should contact your specialist (4952 3900) or if after hours your local emergency department.

It is possible to notice some discomfort in your chest following an ablation procedure (particularly with a deep breath in) if there is inflammation around the lining of the heart. This will usually settled down within 1-2 days and can be treated with paracetamol or panadiene if needed. Anti-inflamatories such as neurofen are often effective for this sort of pain and are usually fine for patients post ablation procedures as long as there is no pre-existing heart failure or cardiomyopathy.

In the rare event that you experience any more concerning symptoms such as shortness of breath, a fever, visual disturbance, arm or leg weakness, dizziness or chest pain then it is important to contact your specialist (4952 3900) or visit your local emergency department promptly.

In general patients can return to things as normal the following day after an ablation. More strenuous activities such as jogging/running or going to the gym should be avoided for a week following an SVT ablation and two weeks following an AF or VT ablation.

Atrial Fibrillation (AF):
There are 3 types of medications that are important to take after an AF ablation. Some inflammation and irritation early on after an ablation can sometime cause AF or extra beats and for this reason your antiarrhythmic medication (sotalol, flecainide or amiodarone) should be continued after the procedure for at least a month or until follow up with your cardiologist. It is also important to take a reflux medication (which reduces stomach acid) at 40mg a day for six weeks following an AF ablation (nexium, pantoprazole, omeprazole or rhabeprazole), since this will reduce the risk of injury or irritation to the oesophagus which sits right behind the heart. After an AF ablation it is very important to remain on anticoagulation/your blood thinner (rivaroxaban, apixaban, dabigatran or warfarin) at least until you follow up with your cardiologist in 3 months as well.

Supraventricular Tachycardia (SVT):
After an SVT ablation it is common to stop your anti arrhythmic medications straight after the ablation procedure.

Ventricular Tachycardia (VT):
After a VT ablation whether or not you can cease or cut back on your antiarrhythmic medications is very specific to your heart condition and the type of VT ablation so it is important to clarify with your electrophysiologist if you are unsure at all with what to do with these medications. Your hospital discharge summary is usually a good indicator of the medications you should be on going forward and your specialist will write a letter to your general practitioner including your medications as well.

Following an atrial fibrillation ablation it is possible to have a recurrence within the first month or so due to some local inflammation and irritation. This may settle down of its own accord but if it does not you should contact your cardiologist for advice.

After an SVT ablation some patients may still notice the occasional ectopic (extra) heart beat. This is quite normal and provided you no longer experience the very rapid palpitations from your SVT, the procedure has still been successful. Some patients describe this as their heart ‘trying’ to race away again but it can’t because the short circuit is no longer there.

For all ablations you should follow up with your cardiologist 3 months after the procedure. 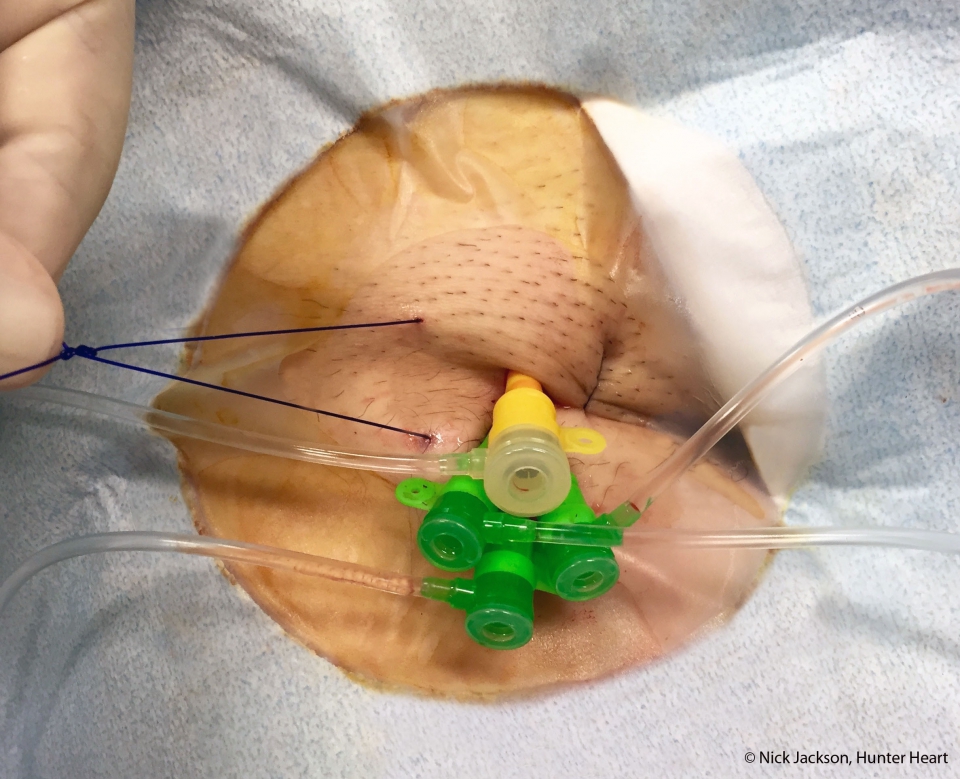 The picture above shows four sheaths that are placed into the femoral vein on the right hand side at the top of the leg. Electrical catheters can then be placed through these sheaths to perform an electrical study or an ablation procedure. Following the procedure the sheaths are removed and a firm suture is tied over the area to prevent any bleeding. This suture is then cut and removed in four hours time.